Very fruity, typical of the region, with notes of plum, raisins and pepper. Voluminous, with an intense structure, with soft and pleasant tannins, a balanced and harmonious finish.

Subtle vanilla and toasted aroma due to its oak aging.

Award winning wine that never fails to deliver, even across vintages. Here are some of its recent accolades:

The Bodega Tukma Malbec Reserva was made with high altitude grapes from our vineyard in the Tolombón Valley, Salta province at 1700 meters above sea level.

The best grapes in the vineyard go through a double selection table and a minimum of 6 months in oak barrels.

It is very fruity, typical of the region, with notes of plum, raisins and pepper. The time spent in French oak barrels contributes subtle notes of vanilla and toasted aromas. Voluminous, intense structure, with soft and gentle tannins, balanced and harmonious finish.

A quick history of the Malbec grape

Originally from Bordeaux, in the Cahors area, the Malbec grape arrived from France in the mid-19th century. He quickly found his homeland in our country and developed his own personality.

At the end of the same century, the phylloxera plague that destroyed several vines in the French countryside made the Malbec grape disappear, which meanwhile continued to grow only in our soil. That is why today “Malbec” is synonymous with Argentina.

Bodega Tukma is located in the Calchaqui Valley of the Northwest of Argentina, near the Ardean skies, high above sea level at altitudes between 1,700 metres to 2,700 metres, in the lands of the ancient wines of unmistakable identity and unique character with a long history dating back to the Diaguitas and talented Incas.

When we say it is an award winning wine, this is what we meant:

There are no reviews yet.

Be the first to review “Tukma Malbec Reserva” Cancel reply 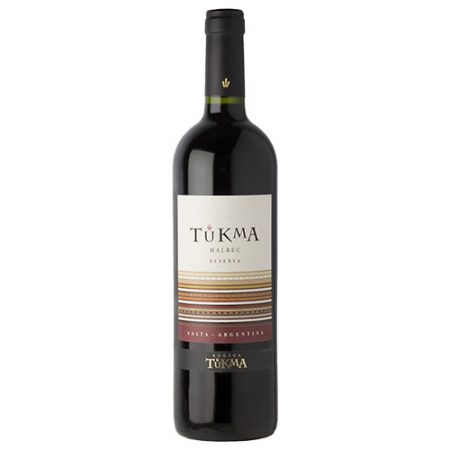